We’re on the up! We’ve just won 2 successive promotions to the Vanarama National League. We’re a part time club in a league where most teams are full time. We’ve made a solid start to the season and intend to upset a few more big teams this season.
We’re at the heart of the community. We run youth teams from 6-18 and a womens team. We’re fundraising for Refuge. We support local food banks, hand out presents at a children’s hospital at Christmas and we’re making our ground more accessible to all
3. The club is run by volunteers and we’ve got passionate fans all around the world who wear the claret and blue shirt with pride.
Weymouth Football Club Ltd Default location
Bob Lucas Stadium
Weymouth Dorset DT4 9XJ
United Kingdom
Dorset GB

We were formed in 1890 after 3 local men took a stroll on the town’s beach and decided to form a football club to represent the town. Soon after it was decided that the club’s colours should be influenced by those of the Jubilee Clock on the Weymouth seafront. As such our colours became, and remain, terracotta and blue.

We experience great success in the 60’s and won the Southern League Championship in 1964/5 and again the following season. The first triumph was under the stewardship of Frank O’Farrell, who went on to become Manchester United manager.

We’ve got a history of developing players and seeing them go on to great things. In the 80’s Graham Roberts played for us and went on to captain England, Andy Townsend joined us from Welling and went on to have a glittering career and played in 2 World Cups and Steve Claridge started his nomadic career with us.

The 2010’s were a struggle for us, but we’re on a good path now. We’re run by our fans and we’ve just won 2 successive promotions to The Vanarama National League. We’re now competing with some big clubs all across the country and loving the challenge.

We’re a part time club in a league where most teams are full time. We’re made a solid start to the season and intend to upset a few more of the big teams this season.

We’ve continued to build on our reputation as a club who develop young players. We’ve, rightly, got a reputation for developing young talent and helping them make it in professional football. AFC Bournemouth and Republic of Ireland goalkeeper, Mark Travers, was playing for us just 3 years ago and last season our striker Brandon Goodship joined Southend United in League 1. We’ve got plenty of promising youngsters in this seasons team, too!

HEART OF THE COMMUNITY

We play an integral role in the community in south Dorset. We recently introduced a new Womens team and run youth teams from ages 6 to Under 18’s.

Our Women’s team arranged a deal with the domestic abuse charity, Refuge, to raise awareness of the support for victims of domestic abuse. We’re proud of them for setting an example here and for using the club’s reach to help the local female community.

Weymouth is a town where around 25% of children live in poverty, so we’re using our influence to help where we can. We support local food banks with regular collections and arrange an annual visit to a local children’s hospital to hand out presents to sick children.

We’re making real efforts to make our home ground accessible to all. Last year we won a grant to improve wheelchair access to our bar area to make sure our disabled fans can enjoy the full match day experience.

Our nickname is The Terras and our fans are like a family. We often talk of the #TerrasFamily and it really is like that. Our Chairman is a passionate fan who has supported The Terras for ages and often mixes with the fans on the terraces.

We’ve got fans all around the country and the world who all wear the claret and blue shirt with pride. Our fans support us in great numbers wherever we go and you can be sure they always get behind the team.

Our impressive social media following, as outlined above, show how well supported we are and your brand can gain national exposure by supporting a team from Dorset.

Our fans have raised a phenomenal amount of money to support out playing budget via various fundraising schemes. Last season they raised £30,000 to fund covid-19 testing and safety measures which allowed us to participate in the Conference South Play Offs – which we won! 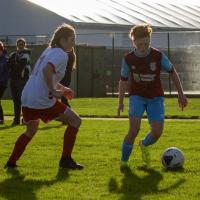 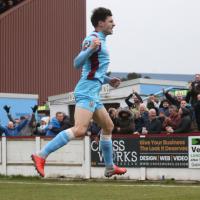